Understanding what Acid Reflux is

Acid reflux is one of the many common stomach related problems. Commonly it is known as acid reflux but in technical medical language, physicians call it GERD or gastroesophageal reflux disease. If we talk about that what is acid reflux, it is simple to define, but before that we have to know some basic functions of the stomach.

Our stomach is the key organ, which is involved in food digestion, although some part of the food is digested in small intestine too. The stomach has enzymes and acids, which help in the process of digestion. Pepsin and hydrochloric acid are the main acids, which are present in the stomach. The lining of the stomach secretes mucus to protect itself from these strong enzymes, which can cause harm to the stomach itself, if the mucus membrane is absent due to some problem.

On the other hand, esophagus is a tube like structure, which extends from the buckle cavity to the stomach and transfers all the food to the stomach. After getting this basic information, we go back to what is acid reflux. When gastric juices of stomach liquids travel back to the esophagus, this condition is called as acid reflux. As we discussed earlier, that stomach acids are quite strong and they can damage the stomach lining but mucous membrane protects it. However, esophagus do not have any such lining, so these stomach acids are quite dangerous for esophagus. 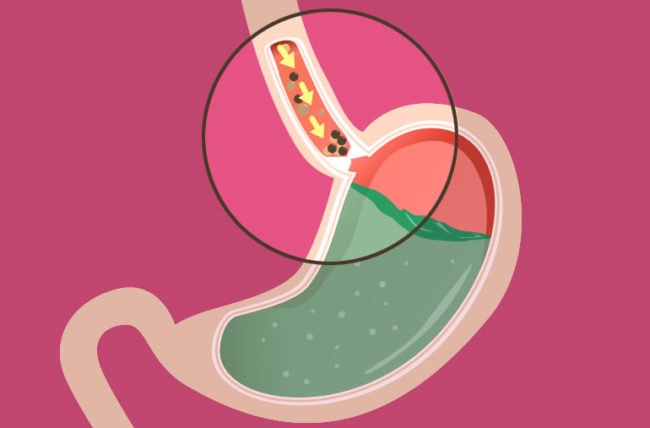 Actually, a ring of muscles is present at the base of the esophagus, which prevents the reflux of acidic liquids into the esophagus. This ring is called as Lower Oesophageal Sphincter or LOS. When food passes through LOS, it gets close. If there is a problem with this ring and it cannot get close properly the acidic liquids of stomach travels back into the esophagus and we call this condition as acid reflux.

Acid reflux has some common symptoms, like a burning sensation in the chest, which is also called as heart burn. Asthma is also a symptom in the patients of acid reflex, as acids travel up to the throat and enter into the air passage. Patients feel difficulty is swallowing food. Dental destruction is also seen in some patients, when acid reflux gets severe. Some people suffer from acid reflux in some specific condition, for instance after eating spicy food or eating too much. However, if an individual feels this heartburn more than twice a week, it is a clear indication that he is at higher risk to get GERD or Acid reflux.

In this situation, it is necessary to consult a doctor for proper treatment or seek proven treatment options at home, see acid control by digestive science. But if someone feels occasional heartburn, he can use some supplements or home remedies to cure the problem. What is acid reflux is an important question. It will help you to identify the problem and it will be easier for you to cure it or to go to doctor for the proper treatment. It is always better to start the treatment at the early stage, otherwise it can cause serious damage to the esophagus.

How to Lose Weight Fast for Teenage Girls